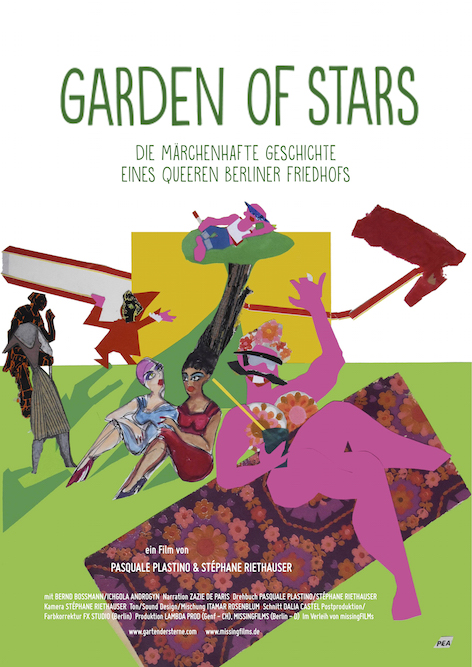 An enchanted cemetery in Berlin. Next to the Grimm Brothers’ grave, stillborn babies and gay people rest in peace. This is the Garden of Stars.

An enchanted cemetery in Berlin. Next to the Grimm Brothers’ grave, stillborn babies and gay people rest in peace. This is the Garden of Stars.

Once upon a time, there was an old cemetery in Berlin, where the Brothers Grimm are resting in peace. Behind the entrance gate was an old, decayed little house, the former latrine. Between the alleys, visitors walked with their heads down and whispered. One day, after visiting the grave of his long-time companion, Ichgola Androgyn heard the little house speak to him: "Do me up!" Like in a fairy tale. Soon afterwards, Ichgola turned the old little house into Germany's first cemetery café. He called it "Finovo", which consists of "fin", end, and "novo", new beginning. Since then, the cemetery has transformed in a magical way. On the terrace of the café, Ichgola (alias Bernd Bossmann, man/woman cabaret artist, gay/AIDS activist) warmly welcomes the visitors who are enjoying his homemade pies. Neighbors come here every afternoon to meet and have a cappuccino or a beer. The bereaved buy some roses or tulips from the colorful flower shop. Bernd also works as an undertaker. He focuses on stillborn babies. For these so-called "Star Kids", he created a special field: An enchanted corner with thousands of flowers, pinwheels, elves, fairies, angels and teddy bears watching over the graves, where parents can find an individual spot for their lost child. Bernd and his friends collected all the biographies of the men that left us too soon in a black Memorial Book: Rio Reiser, Manfred Salzgeber, Ovo Maltine, but also the many anonymous people who wrote important chapters of the Berlin gay liberation movement. Guided tours of the cemetery for school classes are also organized. With teenagers, but also with young children, talking about the meaning of life, religion, or suicide. The goal is to break the taboos of death. In the summertime, one can hear the joyful melody of the birds twittering and the kids playing in this green oasis amidst Berlin. When winter comes, the garden is covered with glittering snow. At night, after a memorial service in the chapel, parents and their children walk up the main alley with torches, pass the imposing cross and pay a visit to their lost daughters, sons, brothers and sisters. In one of Europe's most colorful cemetery, the funerary culture suddenly takes a new dimension, and life is now celebrated with all its mysteries. Nobody walks with his head down anymore. In counterpoint to the story of the Garden of Stars, the legendary transsexual voice of Zazie de Paris tells us "Godfather Death", a fairy tale of the Grimm Brothers.

Stéphane Riethauser, Author, Director
Stéphane Riethauser was born in 1972 in Geneva, Switzerland. He holds a law degree from the University of Geneva. Journalist and director at Swiss Radio Television RTS (2003-2008), for which he directed dozens of documentaries. Since 2009, he has lived and worked as an independent filmmaker in Berlin. His first fiction short film “Prora” (2012) was selected at more than 120 festivals and has won 15 awards.

Pasquale Plastino, Author, Director
Pasquale Plastino was born in 1959 in Southern Italy. Ph.D. in modern philology. Theater studies at the Piccolo Teatro in Milan. Since 1981 theater director. Since 1992 assistant director of Bernardo Bertolucci and Carlo Verdone. Since 1996 has worked as a freelance scriptwriter. He lives between Rome and Berlin.